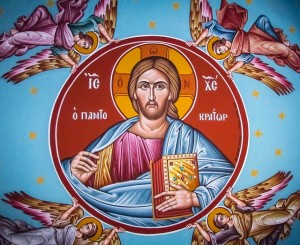 Why “Seated at the Right Hand of God”?

I’ve been back to blogging on the Heidelberg Catechism of late.

Recently I worked through what these 16th-century Reformed theologians thought about the Ascension.

In their line by line commentary on the Apostles’ Creed they took each obvious and not-so obvious issue in turn:

50 Q. Why the next words: “and is seated at the right hand of God”?

Good question, even if basically nobody is asking it today.

So, now that we are on the topic, why DOES the Creed say that?

The Easy Answer: The Bible Says So

I suppose the easiest answer is “Because the Bible says so.” Remember how Stephen, as the crowd pumelled him to death with stones, looked to heaven and said that he saw Jesus sitting there?

But filled with the Holy Spirit, he gazed into heaven and saw the glory of God and Jesus standing at the right hand of God.

Okay, I guess he got tired of standing there and sat down.

And there is another simple answer: If he bodily rose from the grave and bodily ascended to heaven, he has to be bodily somewhere.

Complication: What is the Father Doing with Hands?

But then a different problem arises: God is not physical. God, according to Scripture, is Spirit, and by Church teaching the Father is not to be portrayed in physical ways.

You see this in the ancient Temple.

You would expect God to be sitting there on the, as it were, wing chair. But no.

And one of the commands on the tablets inside that Ark clearly forbade making any physical portrait of God.

So when the New Testament’s idea of the heavenly throne room, what is God doing with hands?

The trouble with the idea is called “anthropomorphism”: falsely attributing human characteristics to God. So there is a problem in the picture that the language of the Creed (and Scripture) creates.

(Though it does make room for the old joke about God being left-handed — since Jesus sat on God’s right hand.)

The Symbolic Answer: Christ Is Ruler of All

This word picture of God bodily occupying a physical throne room has to be symbolic language. It must point to a greater, invisible reality.

So here’s the Catechism’s take on the question:

A. Because Christ ascended to heaven

to show there that

he is head of his church,

the one through whom the Father rules all things.

Yes! The word picture of enthronement points, as a symbol, to a bigger truth. And it is an important reality:

Christ is large and in charge, the ruler of all, and especially the head of his Church — us.

This idea of Christ at God’s right hand is what you see portrayed inside the domes of countless Orthodox Churches: Christ “Pantokrator” or “Ruler of All.”

So when you say the Creed, or think about Christ after the ascension, remember that the imagery teaches us he is King of King and Lord of Lords — and let that fill you with trust and hope, whatever you are facing.

I’d love to hear your thoughts about Christ’s sitting at the right hand of God in the comments.