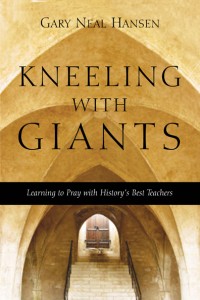 If Christian faith is really a relationship, then you and God need better ways to spend time together.

Unique people can’t all connect with the same approach to prayer.

We need a range of ways to grow closer to God.

We need ways of prayer that fit.

Our personalities are different: Some of us are talkative and some of us are quiet. We need ways to pray that allow us to be who we are.

Our circumstances are different: Some of us are in peaceful times. Some of us have been slammed with tragedy. We need ways to pray that account for what we are facing.

Each one is deeply rooted in a major branch of Christianity.

Each one is very different from all the others.

Each one has shaped the lives of millions of disciples.

One of them is a fit for you.

Get Kneeling with Giants on Amazon.com

‘Best Book of the Year on Spirituality,’ saying ‘This book is nearly a masterpiece.’

April 30, 2013, Christian Resources Together, an alliance of Christian retailers and suppliers in the United Kingdom, named Kneeling with Giants its

‘Devotional Book of the Year’.

2013, the blog “Spirituality and Practice” reviews Kneeling with Giants and names it one of the 50

Across Denominations and Traditions

May 2012, interview on Kneeling with Giants in Christianity Today.

May 21, 2012, interview on the blog of Chris Maxwell, Campus Pastor and Spiritual Life Director at the Pentecostal Emmanuel College in Georgia.

December 10, 2012, in a Presbyterian Outlook review of Kneeling with Giants Richard Ray says

This is a wonderful book…It achieves what few others dare.

September 2012, The Lutheran, the magazine of the Evangelical Lutheran Church in America, features Kneeling with Giants in its

The result is stunning….one of those books that those who take prayer seriously are likely to re-visit regularly.

And in the Blogosphere

as a lay-person I found it approachable and easy to read. … I’d love to be able to work through this with a small group or a prayer partner.

(She eventually did. See what happened when I met with them via Skype!)

August 9, 2013, Hearts & Minds Books “Booknotes” blog in a review of resources on spiritual formation calls Kneeling with Giants an

Get Kneeling with Giants on Amazon.com

(There are, of course, affiliate links on this page.)