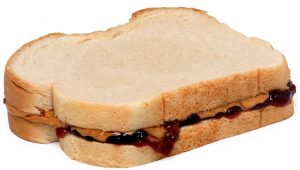 There are two stories, more or less related, but instead of putting them one after the other (as was the case last week), one story is split in two like slices of bread, with the other one spread in the middle like the PB&J.

Both stories are about misunderstanding and accusation.

The framing story is Jesus and his relatives.

Rumor has gone round that Jesus has gone bonkers. That’s the top of the sandwich.

You know: two and a half chapters of healing people of leprosy, other diseases and disabilities, casting out demons. Not to mention preaching about submitting to God as king. Crazy stuff like that.

His family comes to collect him. Maybe they’ll do a little intervention, get him back under control.

The second slice comes at the end. Jesus declares that his really truly family is anybody who does God’s will.

He doesn’t really disown Mary and whoever else showed up, but he does give them a surprising turn. And he does declare that his followers, then and now, are his close kin.

The tricky thing with the bread of this sandwich is it isn’t just about saying you believe in Jesus. To be Jesus’ brother or sister you need to actually do God’s will.

So what’s the peanut butter?

In between the slices of bread comes another group of accusers. In addition to the crowd and his family, Scribes have turned up to make accusations: Jesus isn’t just crazy, they say. He is actually demonic.

That is, they assert Jesus is casting out demons by demonic power.

You’ve heard about “demonizing” your opponents. It’s a classic propaganda technique. Call them bad names and people can more easily dismiss and condemn them.

In the heart of the passage, Jesus turns the accusation around on them with a bit of poetic theology.

With the sort of parallelisms familiar to any reader of the Psalms and Prophets, he points out that no self-respecting devil would cast out devils. Using the NRSV I suppose I might chart it out like this:

He points out that to plunder someone’s house one first has to capture the owner and tie him up.

That’s a sort of rhetorical device — an “enthymeme” perhaps, a syllogism with the conclusion left off for the audience to figure out.

Jesus is proclaiming that he has, in fact, entered Satan’s house and tied that bad boy up. That’s why, and how, he can cast out demons.

So then the really juicy jam on this sandwich

The jam is the discussion of the “unforgivable sin,” or “blasphemy agains the Holy Spirit.” It is pretty potent stuff.

A lot of theological and homiletical ink has been spilled about this.

And a lot of sad Christian anxiety has been poured out out about it as well. A lot of people worry that they have somehow placed themselves beyond God’s forgiveness and grace.

The good news: If you are actually worried about this it’s pretty clear that you haven’t done it.

But what is it?

Mark doesn’t want us to miss it — to be as confused about it as we have been for 2000 years. He points out that Jesus only brought up the unforgivable sin, blasphemy against the Holy Spirit, for one reason:

The Scribes had looked at Jesus, seen what he was doing, and believed that it was the work of Satan.

That is, they looked at God in the flesh, doing good to all, and declared that it was actually evil. Jesus said that was blasphemy against the Spirit.

Here’s what that means:

If you look at light and say it is darkness, you are in a really bad place. If you are convinced “white” is “black” there is little that can be done for you.

Committing the unforgivable sin is not a matter of having done something God has explicitly forbidden — even something really objectively awful.

The unforgivable sin is when you become the kind of person who looks at goodness and believes it to be evil.

So… If you see people doing what Jesus did …

… do you call it evil? If you really believe that goodness and mercy are evil, then it is just really hard to find your way to repentance.

I sort of suspect that the opposite may be true as well.

If you look at people doing evil, for instance …

… and call it “good,” this too may leave you in a world of hurt.

The text isn’t quite as explicit about calling evil “good.” But it surely is the reciprocal of calling good “evil” — and it is happening in the world around us. Even among people who say they believe in Jesus.

Maybe in this there is still room for repentance. I hope so.

I’d love to send you these Monday Meditations (along with my other new articles and announcements) straight to your inbox. Scroll down to the black box with the orange button to sign up for my weekly(ish) newsletter and all this will be yours…