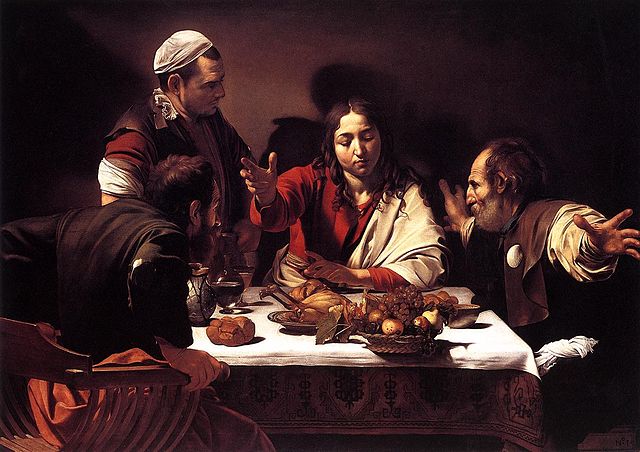 I love this Sunday’s Gospel text. To me, among all the resurrection appearances in the Gospels, Luke 24:13-35 evokes something of the way you and I still encounter the risen Christ.

Two disciples on a walk to Emmaus, talk about Scripture with Jesus unawares. Then at table when they get there, they find Christ in their midst. We often meet him in similar places.

We don’t expect to see him bodily. We know he ascended into heaven to sit at the right hand of his Father.

But we do expect him to be present. As he said over in Matthew, just after giving the Great Commission,

Sure, in the common piety of North American Christianity Jesus is there in our hearts, just where we asked him to be. And sure, we are called to at least try to see him in the face of those we encounter and who, hopefully, we treat with his kindness (cf. Matthew 25:31-46).

This text is about another kind of encounter — maybe two, actually — that we still have and wake up to say “Hey! That was Jesus!”

You and I will hear or preach this story on the third Sunday of Easter, but within Luke’s Gospel the scene is still the very day Jesus rose from the grave.

In the morning the women went and found the tomb empty. Then Peter ran to the tomb, finding it empty as well.

None of them, at least in scenes recorded by Luke, had actually s the risen Christ.

Now, later in the afternoon, one disciple named Cleopas, and another unnamed, walk away from Jerusalem.

That fact is worth pondering. It seems like the rest of the disciples were all sticking together. They were behind locked doors in John, and at the end of this text that’s where Cleophas and old what’s his name will find them.

So why did these two high-tail it out of there? The text says they were sad (cf. verse 17). Were they so bummed that they decided to bag the whole “following Jesus” thing? It does sound like they were kind of packing it in.

The predominant mood sounds like grief — and that should not surprise us. Jesus died two days before, and they had set all their hopes on him. To their knowledge, despite the tale of the empty tomb, nothing about their loss has changed.

When people are grieving, often they wand to talk about their loss, chewing over memories both good and bad, processing hopes dashed, what might have been, what should have been. And that’s just what they were doing. They were

…talking with each other
about all these things that had happened.
… talking and discussing…” (Luke 24:14-15)

When a stranger joins them on the road, they are amazed that he appears not to know about Jesus and how he was arrested, tried, tortured, killed. That’s like grief too: the loss is so consuming that it can be a shock to find that anyone is unaware of it.

What we know, but Cleophas and his chum do not know, is that this ignorant stranger is actually Jesus himself, risen from the dead.

You might think that when the person they are talking about at that very moment shows up they would be startled, relieved, filled with joy. But no. They are utterly oblivious.

My first instinct always assumes it was Jesus himself who “kept” their eyes from seeing the obvious. Today, however, it sounds like another symptom of grief. When you are overwhelmed by your awareness of a loss, you just can’t see the rest of the world accurately. It can seem like a kind of madness.

But the fact remained: Jesus was there with them in their grief, known or unknown.

And Jesus met them in their confusion. As they walked the miles to Emmaus, he helped them understand the biblical hints, allusions, and outright predictions that the Messiah would suffer, die, and only then rise again to glory.

In the words of the NRSV,

…he interpreted to them
the things about himself
in all the scriptures.” (Luke 24:27 NRSV)

The same word is rendered, in other translations and other biblical contexts, “explained,” “expounded,” or even “translated.” The Greek word is a variant on the one from which we get “hermeneutics,” the rules, and principles, and practice of “interpretation.”

In some circles (not the best educated circles) the word “interpretation” is not held in favor. I’ve heard people say, “That’s just interpretation,” meaning “you are twisting the text away from its actual and obvious meaning.”

Really, though, “interpretation” is simply what we do when we encounter a text and try to draw meaning from it. Interpretation is unavoidable. The point is to interpret wisely and well.

And that’s what Jesus did for Cleopas and Disciple Doe. The particular term for “interpretation” here is sort of an emphatic form. Jesus interpreted soundly, guiding them to the particular meaning God had intended in those texts he pointed out,

Chances are they were quite familiar with those texts. We may be familiar with Scripture as well, from Genesis to Revelation. But this text is telling us that to really get what Scripture is trying to give, we need more than our own skill as readers and scholars.

That is to say, to find Jesus in the Scriptures, beginning with Moses and through all the prophets, just like these grieving disciples we need Jesus to help us.

Historically, Christians have tended to say that Jesus has in fact helped us, all of us, the Church. We have a shared Christ-centered understanding of the Bible, or at least of a vast swath of the Bible, including an Old Testament that points to Jesus, Gospels that show him in the flesh, and the rest of the New Testament that shows how he was revealed and understood in the working and thinking of the Apostles.

So this is one way that we still encounter the risen Christ. In the midst of our grief, our anxiety, our confusion, our self-referential obsession, we hear the Church and the Spirit teach us how Jesus is present in the through-line of Scripture.

And surprisingly often, after spending time listening closely to Scripture, we wake up and say

Wow! Jesus was here! He spoke to me somehow.

It was like that for these disciples on the Emmaus road.

Were not our hearts burning within us
while he was talking to us on the road,
while he was opening the scriptures to us?” (Luke 24:32 NRSV)

Then they arrived at Emmaus. Jesus seemed to be heading farther down the road, but they asked their new friend to stay for dinner.

The disciples are the hosts if Emmaus was their home town, or perhaps as artists have often portrayed it, they were inviting Jesus to join them at an inn.

It was Jesus, though, who took the lead.

And those four actions should sound very familiar. That’s what Jesus did at the Last Supper.

Perhaps Cleophas and Bob had been there in the upper room with the twelve and whoever else.

Those actions also harkened to the times when he fed the 5000.

Whatever context came to mind, it was when Jesus took bread, blessed, broke, and gave it to them that their eyes were opened. For a split second they saw, they knew, that this stranger was Jesus.

I hope that experience has at least a tingle of familiarity to you.

It is at table that we are most likely to have palpable and mysterious encounters with Jesus.

Often it is when we celebrate the Lord’s Supper. Even in churches that don’t celebrate the Eucharist frequently or have a strong emphasis on Christ’s presence in the Lord’s Supper, people encounter Christ in that sacred meal. Ask around. You’ll find people who will tell you that their closest and most prayerful encounters with God are when they receive the sacrament.

But it also happens when we share an ordinary meal with ordinary Christians. Sharing table fellowship — and I’m meaning an actual meal at home or at a restaurant, not snacks at coffee hour — can break down barriers, build common ground, and reveal the image of Christ in your companions.

I’ve had many meals like that. I remember one in particular, when I was first living on my own. I had a couple dear friends over and made something that seemed especially complicated. My friends helped me bring it all together. When the table was set and the food was finally before us, we sat, just as the record on the stereo clicked to a John Fisher song.* He sang,

Rest, rest in him; your work is through…

It was our grace. Christ was in our midst!

I’d love to send you all my Monday Meditations, along with my other new articles and announcements. Just scroll down to the black box with the orange button to subscribe, and they’ll arrive most Fridays by email.

*John Fisher was a really wonderful Christian folk/pop singer back in the day. He’s still alive, writing and speaking, though he doesn’t seem to have done any new recordings in a long while. I tried to get you a YouTube of him singing the song I mentioned, but couldn’t find one. Alas! It seems his music is now very hard to find in digital or even used in vinyl form. (If you happen to see this, Mr. Fisher, please upload those albums to iTunes!)