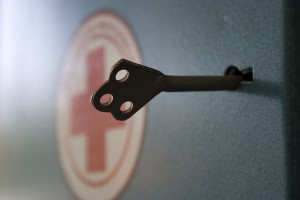 Say that today and somebody will feel insulted.

Back in 1611 people knew it was a musical instrument. Language changes as centuries pass.

That can happen with theological vocabulary too.

Take the word “keys.” Listen hard to sermons, to your Christian friends, or to Christian media. Is anybody talking about keys?

Back in 1563, when the Heidelberg Catechism was written (that much-loved and widely used Reformed summary of Biblical Christianity about which I blog so relentlessly) everybody knew it was a theological term.

It goes back to a conversation with Jesus and Peter in Matthew 16:

This connection was so obvious that when they started talking about the keys the writers of the Catechism did not even bother to give a footnote the passage.

The question for Christians in the 16th century was not whether this was a “key” faith topic (sorry), but what exactly the “keys” were about which Jesus spoke.

Roman Catholicism and newly separate Protestantism differed on who held the keys: were the keys given to Peter personally, and passed to his heirs as bishops of Rome (the Popes), or given to the Church built upon his faith. In the generally peaceable Heidelberg Catechism, that argument does not come up.

The Catechism wants us to focus instead on what the keys actually are — and what it is that they lock up or open.

Here is the initial reference to the keys from the Heidelberg Catechism with a little emphasis added for clarity:

A. The preaching of the holy gospel and

open the kingdom of heaven to believers

and close it to unbelievers.

Whoever holds the keys, the thing they should be opening or closing is salvation — forgiveness, eternal life, heaven itself in the presence of God.

We are charged with bringing the good news of salvation to the world. That is our mission. We long to make sure people know the door is wide open. That is one way preaching, or telling about Jesus and his love, functions as a key — though going through the door requires faith and repentance, so the act of preaching can also effectively lock some out.

“Discipline,” too, is a key, says the Catechism. That sounds a bit more negative to modern ears.

It is probably easier for some to use the word “accountability.” Others would do better to think of the community of faith paying loving attention to the growth of its members.

More on that another time, but whatever you call it, discipline, like preaching, both opens and closes the door.

In our culture it seems impossible that we would consider anything keeping that door closed. There are two more questions on the keys in the Catechism, and I’ll eventually post on those too. I suspect that both opening and closing are reasonable and useful functions of the keys.

Meanwhile I would love to hear from you in the comments: In your experience of the faith, what has functioned to open and close the door to the kingdom of heaven?