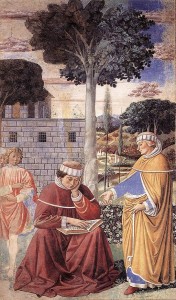 When I posted about the writer’s battle with “the demon of futility” I mentioned the frustration that can come from identifying yourself as a writer.

In a way this is perfectly natural:

A book can be a success by any reasonable standard without appearing on the New York Times bestseller’s list.

Or even without getting one of those gorgeous little orange flags on Amazon.com.

A lot of people have dreams of fame. Some think the way to fame is to write a book. I say

So, what if something you wrote did become a bestseller?

Well, first of all

But then after that,

It is always a matter of fame and obscurity.

Say you score that big league victory. You hit the New York Times Bestseller list. That means your book sold something like 10,000 copies in that particular week.

How well known is your work after such worldly success?

Odds that the person you just randomly met will know your work? Very small.

What lurks behind the desire for fame is a desire to be praised. We are fighting our own sense of inadequacy. We don’t feel we are good enough in some deep down existential way. We want others, the world at large, to say we are worthwhile.

The Desert Fathers and Mothers of 4th century Egypt had to wrestle with their own desire for fame and accolades. They didn’t seek approval. They avoided it.

Here’s a saying from one of Benedicta Ward’s translations that I really like:

They said of Arsenius and Theodore of Pherme that they hated fame and praise more than anything.

Theodore did not avoid them, but their words were like daggers to him.

Motives are always mixed. In some proportion, these ancient monks who fled the world wanted to impress others.

They fought that portion of their motives.

If others approved of them it was a problem. It gave the wrong kind of satisfaction. It pleased the wrong part of them.

It made them happy about something other than progress.

Whataya gonna do? Live in a way that people DON’T approve of? No.

These two chose to do that in two opposite ways. In the process they give us two (truncated) strategies.

Arsenius kept away from people to stay focused.

Arsenius chose the easy way. If he interacted with people, their praise would make him complacent. He needed to keep his eyes down and stay in his cell.

Theodore chose the harder way. Rather than relishing the praise, he kept himself aware that praise was not his goal — in fact it was a temptation. It was painful to constantly set affirmation aside and get back to his calling.

Fame is sort of a silly goal anyway. You can’t spend it. And it would be inconvenient much of the time.

For most of us the best stuff we do is for an incalculably small audience.

I know a lot of pastors. Some of them are great preachers.

But most preachers do their best work for a group of a hundred or so people.

Week in, week out, they hone their understanding of God’s grace in Christ as found in Scripture.

Week in, week out, they shape that message to best impact the lives of a particular community.

In a modest-sized town, only a small percentage of the people will ever be there to hear even a single sermon.

But these preachers really help people: If you listen to excellent, thoughtful preaching Sunday after Sunday it can change your life.

It can seem paradoxical:

Like a faithful preacher, a writer has to think about making an impact on a small portion of the vast number of potential readers. I have to help whoever happens to, in the words of the angel to St. Augustine,

Take up and read.

Set your sites on fame and find yourself in futility.

Set out to help people and you might just find yourself an audience.

I’d love to hear your thoughts on fame in the comments. Have you seen any of your “fifteen minutes” — and what has been the result?