Like food, sexual activity is necessary for survival. But while food is needed for each individual, in the case of sex the need is for the species. Nobody, as they say, ever actually died of chastity.

The understanding of many Christian centuries that chastity is actually better for you may seem at least foreign. In our society we equate sexuality with identity, often without question.

We tend to think of sexuality as something good in itself, and that sexual activity is necessary to human thriving—so much so that some readers may think I’m crazy to bring the topic into Lenten self-examination.

Well, I’m spending Lent with Desert Father Evagrius Ponticus. Evagrius talks about sex, so I will too.

Sex gets a lot of attention in our society. I don’t mean the sexy images in advertising, or the way books that would once have been labeled pornography have become mainstream. I refer to the way that sexuality has become linked to identity.

I was a seminarian at Princeton when the late Thomas Gillespie was president. I can tell you nothing specific about his preaching (fine as it was), but one comment he made stuck with me. He quoted someone saying that in our society “sexuality” has taken the place that “the soul” held in medieval thinking. I’m not a medievalist, but I think he was right.

Fourth century monk that he was, Evagrius associated sexual lust with demonic activity. If you’ve been in the grip of an inappropriate sexual longing, possession may have the ring of emotional truth, no matter what you think about demons.

But, if we get past Evagrius’ demons, he gives us a clear-eyed take on the issue:

“The demon of fornication compels us to desire various bodies.”

That compulsion to desire another person’s body merits our attention in Lent. It is not about love. Love desires another person’s well being. Evagrius points out that we want to use other people’s bodies for our own purposes.

Is it crazy to think that sexuality, as an issue in our Christian living, needs examination, even some reformation? If we want to live centered in Christ, we’ll need our bodies to be in our soul’s keeping—sexuality included.

This sense of having the body in the soul’s keeping is appealing to me. I do not know who first coined the phrase, though I remember it from a novel by Robertson Davies.

It moves away from any sense that God is speaking a big “NO” on sexuality, and toward God’s great “YES” to human thriving—to life deeply rooted in Christ and formed according to his good intention.

Evagrius has a lovely image for both options on sexuality: a sailboat at sea.

The life ruled by sexual desire, he tells us, is like a sailboat with no ballast. Nothing holds the ship vertical, so it is helpless. Rolling ocean waves batter it, and it gets tossed around or capsized. Lust is like those waves.

The chaste life, ruled by Christ with the body in the soul’s keeping, sails in the same sea. To take the metaphor further than Evagrius did, union in Christ acts like the heavy keel, keeping the ship upright despite the waves. Then, when the wind of the Spirit catches the sails, the ship can go where the pilot directs.

As I think about sexuality this Lent (and as you do too, I hope), that seaworthy ship is the vision to hang on to.

Sexuality is part of human existence, but not the main part. It can, like all parts of life, move us toward glory or emptiness; toward wholeness or horror.

We are more likely to find the glory and the wholeness if, like everything in us, sexuality is within a life that draws close to Christ and is ever at his direction.

I’d love to hear from you in the comments! Is it crazy to include sexuality in Lenten self-examination? How do we do that in a way that is wise and balanced? 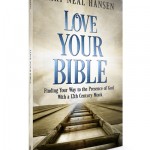 If you enjoy mining the past with the likes of Evagrius Ponticus, you’ll love my new book on classic lectio divina. Get your free copy by clicking here.