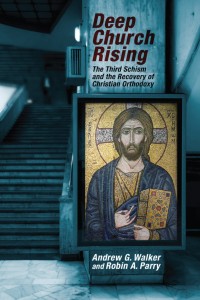 The twenty-first century churches have a problem. Maybe more than one.

We also have more than a few people providing analyses and solutions.

Deep Church Rising: The Third Schism and the Recovery of Christian Orthodoxy by Andrew G. Walker and Robin A. Parry (Cascade Books, 2014; $22.00) is a helpful corrective to the culture-bound, superficial diagnoses and prescriptions that get so much attention.

Rather than attempting to reinvent the faith or the Church for post-modern times, the book calls for a return to “deep Church.” The term was coined by C.S. Lewis along with his more famous popularization of “mere Christianity.” These authors’ choice of the less familiar Lewisian phrase points to its different nuance:

The book calls for a return to historical Christianity. For many this would be not a return, but an initial turn: the connection is tenuous between some of today’s branches of the faith and Christianity’s roots.

Walker and Parry would have us take seriously the standard of St. Vincetius of Lérins (d. c. 445) who said we should hold fast to that which has been taught always, everywhere, and by all. That is, the authors call us to value tradition in the Church’s teaching and practice–in its very identity.

This point is one of three noteworthy features of the book. The authors lead us on an accessible and convincing tour through prominent Patristic theologians on tradition.

It is an important topic to be winsome on, since Protestantism often presents itself as a tradition (pardon the expression) defined by its opposition to tradition. Along the way they shed light on the way a “sola Scriptura” standard for doctrine can place individual interpretation of Scripture above all.

The second thing I want to highlight is the book’s particular understanding of the Church’s history. They present the two thousand year saga as a series of gains and divisions. The gains are early on, as Christianity takes lasting shape from Christ through the era of the Councils.

Then come the divisions, three “schisms”:

The first schism is between the Orthodox East and the Catholic West, generally dated to 1054.

The second schism is more affectionately known as the Protestant Reformation. In Protestant tellings of the story we lean on the rediscovery of the biblical faith. Walker and Parry emphasize that the resultant move from one Church in the West to tens of thousands of Protestant denominations claiming the name “church.”

They do have a biblical point, since Jesus prayed that the disciples’ unity would bear convincing and converting witness to the world. (John 17:21 & 23)

The third schism is of a different nature entirely: it is the Western theological division in the wake Enlightenment.

As in the first two schisms, both sides in the third claim the name Christian.

Presbyterian readers in North America may find echoes here of the Fundamentalist/Modernist controversy in the early 20th century. Walker and Parry might be sympathetic to the conclusion of J. Gresham Machen (d. 1937) that the liberal faction had actually invented a new and different religion. Machen wanted the liberals to admit that they weren’t actually Christian in the historic meaning of the term, and quit their claim to leadership in the church.

However, Walker and Parry would not agree with Machen on the nature of the historic faith. They do not focus on particular historic facts as building blocks of doctrinal propositions. They would be as happy as Machen with the assertions of the Creeds and Scripture. But Walker and Parry focus on a living orthodoxy, known in doctrine, worship, and ethical life.

This all comes together in the third valuable (or if you disagree with them, at least evocative) takeaway: Deep Church is expressed in eucharistic community. To many Protestant ears this may sound unfamiliar. Often the Lord’s Supper is at best an afterthought for us.

But if we listen to our great teachers, say, Luther and Calvin, the Eucharist should play a much larger role in our common life.  And if we take the message of the Eucharist seriously, we will find it connecting us to Christ and his body in a vital spiritual way, forming our very identity as Church.

The book is not a seamless read. Its tone and approach vary, and the sheer range of the vision leads to the authors sometimes writing beyond their expertise–in particular they do not always render Luther accurately.

It is a valuable message, though. The call to live into the depth of what it means to be Church deserves far more attention than it is likely to receive.

(The authors asked me to review the book and gave me a complimentary electronic copy. There are affiliate links in this post.)