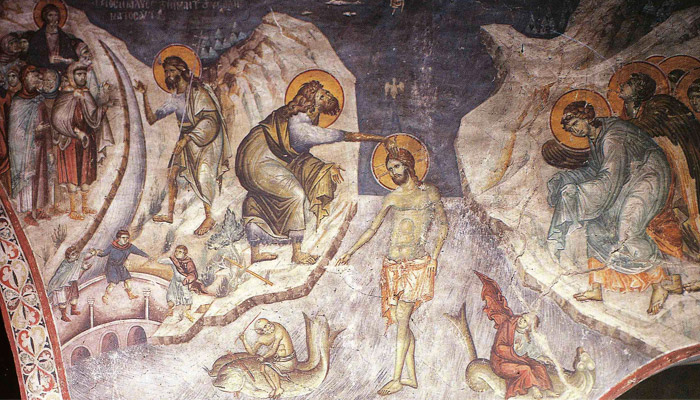 This is the event which Eastern Orthodoxy celebrated on Epiphany itself, or as they often call it, the Theophany.

By way of definitions:

I have pretty good reason to suspect that most Protestants don’t really know what to make of the Baptism of Christ. Well, we think, it shows his humility: God in the flesh stoops down to receive a baptism that is otherwise for the forgiveness of sins.

Beyond that, though, we are often at a loss. Christ, we say, is fulfilling all righteousness by being baptized — and yet no law required it of him.

So what to think? And what to say from the pulpit?

I suggest we take a page from the Orthodox on this one. For the Christians of the East, Christ’s Baptism is a huge big deal. They see it as crucial to our salvation, one of the highest and most holy celebrations. It is right up there with Easter (though really nothing is quite so big as Easter) and Christmas.

Epiphany is not, by the way, “Orthodox Christmas,” as you may have heard it called. They celebrate both in a very big way. One is Jesus’ birth. The other is his baptism.

I wish I could write you a very long post today, mining the Baptism of Christ in Orthodox hymnody, but I’m recovering from two weeks of very serious illness, and I’ll keep it short.

Let me give you the one hymn that gets repeated over and over throughout the season like an Evangelical praise song (which, in a very strong sense, it is). I’ve quoted it from the inimitable Ages Initiative Digital Chant Stand.

Apolytikion of the Feast. Mode 1.

As You were baptized in the Jordan, O Lord,
then the worship of the Trinity became manifest,

for the voice of the Father bore witness to You,
naming You the Beloved Son;

and the Spirit, in the form of a dove,
confirmed the certainty of the word.

O Christ God, who appeared and illumined the world,
glory to You.

This hymn tells you why the Baptism of Jesus is so important: this scene, recounted fully in Matthew, Mark, and Luke and partially in John, is the first clear revelation of the Holy Trinity.

Christ himself is truly God, the Second Person of the Trinity incarnate. In Luke this is most pointedly the case, since the earlier passages have strongly emphasized Jesus’ birth from the Virgin Mary with God as his actual Father.

So in this scene what we learn to do is worship the Trinity. Or perhaps we could say this scene reveals the true Triune nature of the God we worship.

Yes, looking back through the lens of this and other New Testament passages you will see myriad hints of the Triune nature of God in the Old Testament.

But it is here, at his Baptism, that the Trinity is manifest. And so we worship.

The Trinity? Is That a Big Deal?

There is, alas, some chance that you, dear reader, do not think this is a very big deal. In the lived Christianity of today’s Protestantism many think the Trinity is a vague bit of slightly irrelevant speculation.

Nothing could be further from the Truth.

We want Christ alone. Jesus, we say, is the full and sufficient revelation of God, and all we need do is accept him, trust him, follow him.

But where does our beloved Jesus actually lead us? To the revelation of his Father and the Holy Spirit. Jesus leads us to know God, as fully as we broken humans can know and love and trust him.

From this moment of his emergence into public ministry, to the Transfiguration, to his teaching in John, and to the very Cross itself, Jesus is leading us to know not only himself, but the Trinity.

The Trinity is our God. Mysterious, yes, and quite beyond the intellectual grasp of any human mind.

The fact that God exists eternally as One God in Three Persons is something we know by revelation.

And for this revelation, of truly knowing something of the eternal nature of God, we must give thanks.

The only right response is worship.

I’d love to send you all my Monday Meditations (as well as my other new articles and announcements). Just scroll down to the black box with the orange button and subscribe to my weekly(ish) newsletter and they’ll come to you by email.