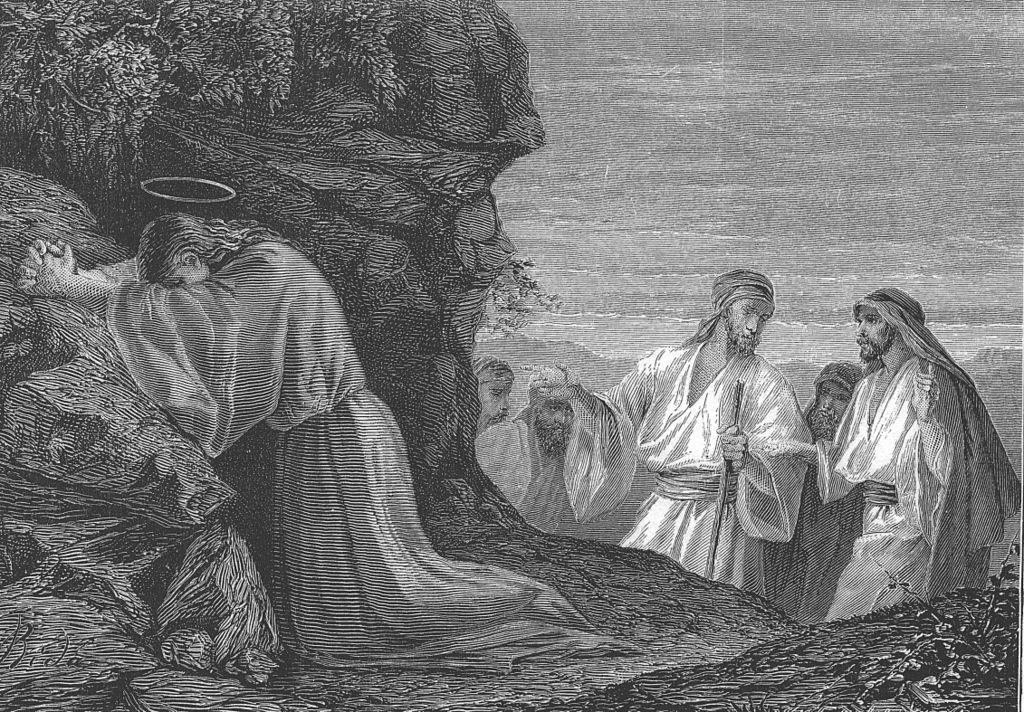 Starting long ago I posted on every line of the Lord’s Prayer. In fact I’ve done it a couple of times, first in writing on the questions and answers of the Heidelberg Catechism, and again in my “Letters to a Young Pastor” series. The posts are still there and you can find them by clicking here or using the search form at the bottom of the page.

One of those posts still gets a lot of visits. I explored the confusing question of why some churches pray the Lord’s Prayer asking forgiveness for “trespasses” while others ask for “debts” to be forgiven, and still others ask forgiveness of “sins.”

You can check it out through this link — the answer is partly about the differences between Matthew’s version and Luke’s version of the prayer, and partly about translation.

If you are preaching this text, keep in mind that people in your pews are asking that question when you read this Gospel text.

Personally I think preaching through the Lord’s Prayer in a line by line sermon series is an excellent plan. Talking about the whole thing in one blog post would be way too long. I’ll talk instead about some of the very cool stuff that frames the prayer in Luke’s telling.

It is worth noting that the whole story starts with Jesus himself praying. Any Christians who think they can follow Jesus without having an active prayer life are fooling theirselves.

There are potential puzzles here: I suspect some would wonder why Jesus would pray if he himself is God. Is that God talking to himself?

Think second of a larger-than-average definition of prayer. Many think of prayer as asking God to do things. That is part of prayer, but not the whole enchilada.

So of course Jesus prayed.

Then, when that most important work was done, Jesus came back to his friends. They had noticed Jesus’ priority on prayer. They wanted to learn from him.

And to convince him they used the argument that John the Baptist had done more to teach his own disciples to pray than Jesus had done for them. Which is kind of funny, at least to me.

Jesus complied with their request. He taught them what we call the Lord’s Prayer. The more familiar version is in Matthew, but you can’t miss the fact that this is the same prayer.

Notice that Jesus puts his instruction in the imperative. He orders them to say these words when they pray. That accounts for the fact that in traditional Christianity, for the last 2000 years, believers have recited this prayer in worship.

This includes, by the way, a good many Christians who would say they can’t abide using prayer books or other pre-written prayers. Many of us think the only legit prayer is something we think of off the tops of our heads.

Nothing against extemporaneous prayer, but Jesus did order us to say these words.

(Of course Martin Luther, who esteemed the Lord’s Prayer more highly than anyone else I know of, taught that we should use it not only for recitation but as an outline for our own extemporaneous praise, thanksgiving, confession, and requests. It makes sure that we bring up the right topics. If you want to learn more about that, read the chapter on Luther in my book Kneeling with Giants. Or get on the info list for my Fall class “Pray Like a Reformer.”)

“Suppose one of you has a friend…”

Then comes the funny little parable. Jesus lays out a scenario for the disciples:

Imagine yourself with surprise guests in the middle of the night. You’re living paycheck to paycheck, and the fridge is totally empty. You go down the street and start tossing pebbles at your friend’s window to wake him up. You ask for bread. He says go away, everyone is asleep.

But the punch line of the parable is when Jesus says if you keep at it, eventually the guy will come down and give you something, just to shut you up.

This gives some the idea that if God doesn’t answer you prayer the first time (because he likes you), then you should just keep bugging him. Finally God will give you what you ask for (just to shut you up).

Really, that is not the point Jesus is making. You have to keep reading:

The next bit tells you God is UNLIKE the one who won’t give you anything unless you nag:

And if you didn’t note the contrast, Jesus makes it even more emphatic:

This is a flat contradiction to the idea that you have to beg and grovel and grind God down.

It is such a contradiction to that message that it leads to the opposite problematic teaching: Some think that Jesus is saying God will always give you exactly what you want.

There is another Bible passage that contradicts that idea. It’s called “Genesis to Revelation.”

Also, there is universal human experience. Even for faithful Christians, life just isn’t like that.

And this passage isn’t really saying that either. I’ll get to that in a minute.

For now, though, Jesus further makes his point that effective prayer is not wearing out the patience of a stingy God. He ends by telling us how to interpret the passage.

He has them reason from what they know about life: Parents love their children, and that means giving them good things

Is there anyone among you who,
if your child asks for a fish,
will give a snake instead of a fish?” (Luke 11:11 NRSV)

Obviously, no. Unless you happen to be a wacko.

No, because being a parent prompts love and requires love. With the exception of the ill and the abusive, parents provide for their kids as best they can.

And God is a better parent than you or me.

If you then, who are evil,
know how to give good gifts to your children,
how much more
will the heavenly Father
give the Holy Spirit
to those who ask him!” (Luke 11:13 NRSV)

I suspect in the actual event, somebody tugged on Jesus’ tunic and said,

Hey, wait a minute, Jesus. Where do you get off calling us ‘evil’?

I suspect Jesus winked when he said it. I can sort of see his eyes twinkling.

But it’s a matter of contrast. God is so truly, purely, overwhelmingly good, that by comparison the most virtuous of our actions shows up as evil.

Remember, Scripture proclaims that God is so good, so holy, that if we saw God face to face we would be struck dead. God, it says, is like a consuming fire, a refiner’s fire that melts us down like gold and burns off all the impurities.

Now if you get stuck on the fact that Jesus called us evil, you might miss one very crucial bit — the bit that explains how he is not saying God is going to answer every prayer the way we want.

…how much more
will the heavenly Father
give the Holy Spirit
to those who ask him!

The thing is, we weren’t asking for the Holy Spirit. We wanted a job, or a spouse, or healing from a disease. But Jesus is saying, to everybody who asks, seeks, and knocks, God gives the Holy Spirit.

But God reserves the right to edit our prayers.

The good news is in the proportion: If God gives the Holy Spirit, that’s actually more than we asked for. We asked for something tiny. God gives us the third Person of the Trinity.

Jesus says God gives himself to us — whenever we pray, whatever we ask or seek or knock for.

So don’t think you have to wrestle God into submission when you pray for something. God is more generous than you are with your own children. He loves to provide for you.

But also don’t think you are going to get exactly what you ask for. God, like a good parent, edits our prayers.

It’s like with the Lord’s Prayer. We ask for cake and ice cream. He gives us our daily bread.

This Fall I’ll be teaching my online class, “Pray Like a Reformer.” We’ll explore the teachings on prayer by two of the most influential leaders of the Protestant Reformation — Luther and Calvin. It’s a great way to refocus your prayer life… So if you want me to notify you when it opens for registration, click here to sign up on the waiting list.