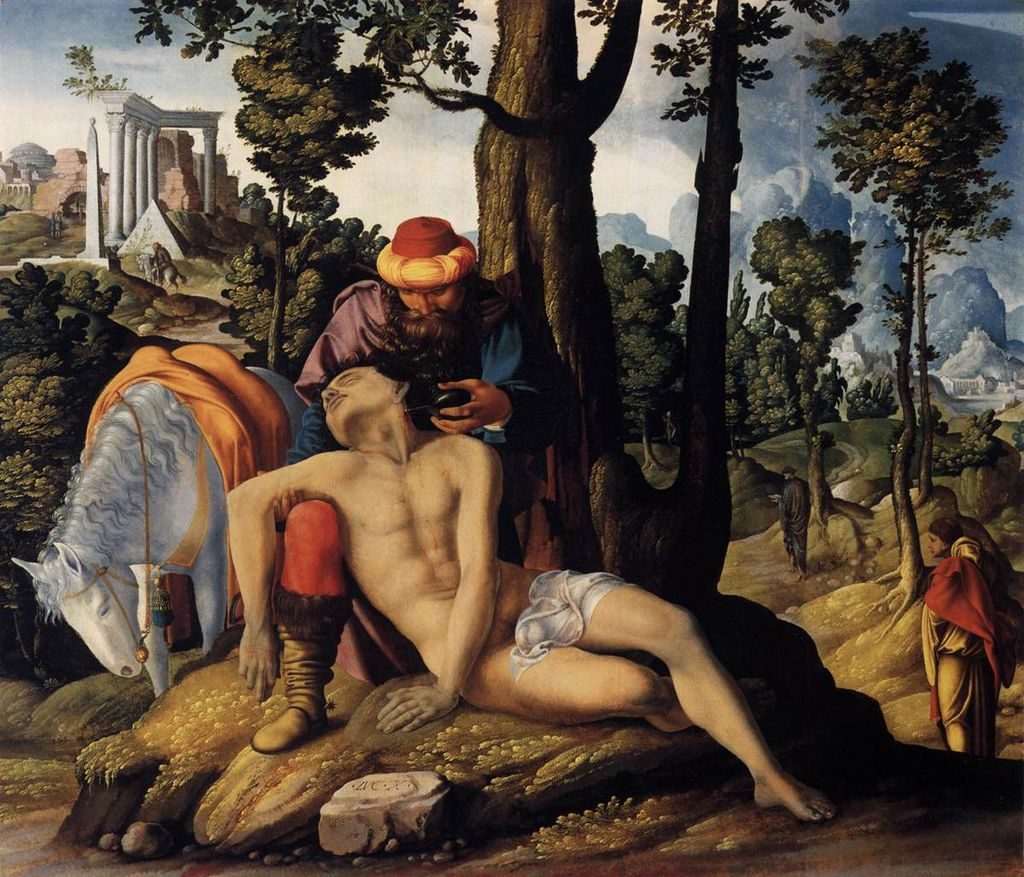 The story of the “Good Samaritan” is one of the best known passages in the New Testament, but only Luke 10:25-37 tells the story.

And here it is, as the Gospel for the 5th Sunday after Pentecost/Proper 10(15).

I love this story. It points to features of Jesus ministry and teaching that are most prominent in Luke’s Gospel, and which are core to the faith as a whole.

I’m not going to explore every nuance. Just a few key bits.

The parable doesn’t stand on its own. It is an answer, or a lengthy on-topic response, to a specific question. The story that provided the question is itself a vastly important passage — one that appears prominently in all thre Synoptic Gospels.

In Luke’s version, Jesus is being interrogated by a lawyer. The lawyer asks

Since the guy is a lawyer, Jesus asks him about the Law — God’s Law, like the first five books of the Bible.

They lawyer answers that the Law’s way to eternal life if what we all think of as the two Great Commandments:

Jesus tells him that he gave the right answer.

Over the centuries Christians have given a lot of attention to that answer.

I really like what Augustine does with the passage. We need to know what a God-pleasing life looks like, and here we have a full description: our whole being tuned to the love of God and neighbor.

Yes, we need help to do it. But it is good to know what we ought to be aiming for.

One thing that is particularly interests me is the way the second of these commandments is almost universally misquoted and therefore misinterpreted.

Love your neighbor as you love yourself.

The actual text is,

What happens in the misreading?

But in the text there is no standard of comparison.

The text asks us instead to expand our personal boundaries. Love “as yourself.” Don’t think of your neighbor as separate, across the fence or across the boundaries of race or class. That person living next door? You need to think of him or her as you.

Fold your neighbor into your sense of who “you” are. Stop focusing on difference and distance, and just do some loving.

We’ll be half-way there when we just start thinking about Christianity as something experienced in the “plural”, instead of in the “singular.” I mean we start out as separate individuals, but through faith and baptism we are engrafted into Christ, and become one Body. If we are made into a single body, the distinction between “me” and “you” should sort of become irrelevant.

That is, don’t hold back on loving because you see a distinction. Love because you know in fact, in Christ, you are connected — one Body.

The other half of the journey is loving the non-Christian neighbor as ourself too. Maybe only the Christians are grafted into the Body, but even those with very different backgrounds and beliefs are our neighbors and are to be loved as ourselves. Hence the parable…

The “Good Samaritan” is fascinating parable at every little turn, but what I want to note is that different people in different contexts interpret it very differently indeed.

Most 12st-Century North Americans identify with the Samaritan, called to love a neighbor who had a very different ethnic and religious background. That’s a very good message for our context. We are at odds between races and between religions. And people professing the name of Christ are too often in the lead at treating their very different neighbors badly. Those of us who are among the privileged slices of society do well to reach out more generously, driven by this passage and its call.

But in some corners of the world they identify more with the guy who got beaten up. And with good reason — a whole lot of people and groups have been beaten, robbed, and left for dead. This poor guy had to accept the culturally tainted help of someone from the group he despised most — a Samaritan. Sometimes this goes to international relations, where people who don’t like America very much have to follow this passage’s advice and accept American aid. Or pick some other disfavored relation. Humility is part of the calling here, and one simply has to accept help from the one who acts like a neighbor.

Back in the Middle Ages and the Reformation, however, the focus was on Jesus — and the parable was given a very different spin. Humanity as a whole was seen as the guy who got beaten, robbed, and left half dead — by sin. In the Middle Ages they tended to lean heavily on that idea that we are “half” dead. Humanity, beaten up by sin, was not totally dead. We still had a bit of life — enough to reach out to God, to repent, to try and live virtuously. Then, and even in the Reformation, the Samaritan was identified as Jesus. Jesus comes to rescue us when we are at our lowest, reaching across boundaries greater than mere human divisions.

Before you dismiss any of these interpretations, it is worth noting that none of them perfectly fit Jesus’ question at the end:

Which of these three,
do you think,
was a neighbor
to the man who fell into the hands of the robbers?” (Luke 10:36 NRSV)

The man answered the way we expect from our North American interpretation: the Samaritan. He showed mercy. And that’s a good point. Jesus rolls with it. He tells the lawyer to do that too.

But look again at the core of the question:

Which of these three … was a neighbor to the man …?

Actually, they all were.

Every one of them was a neighbor.

But all were neighbors. All were called to love the fallen man as their own self.

It’s just that only one lived up to the calling.

I’d love to send you all my Monday Meditations — plus my other new articles and announcements. Just scroll down to the black box with the orange button they’ll arrive in your inbox most Fridays.