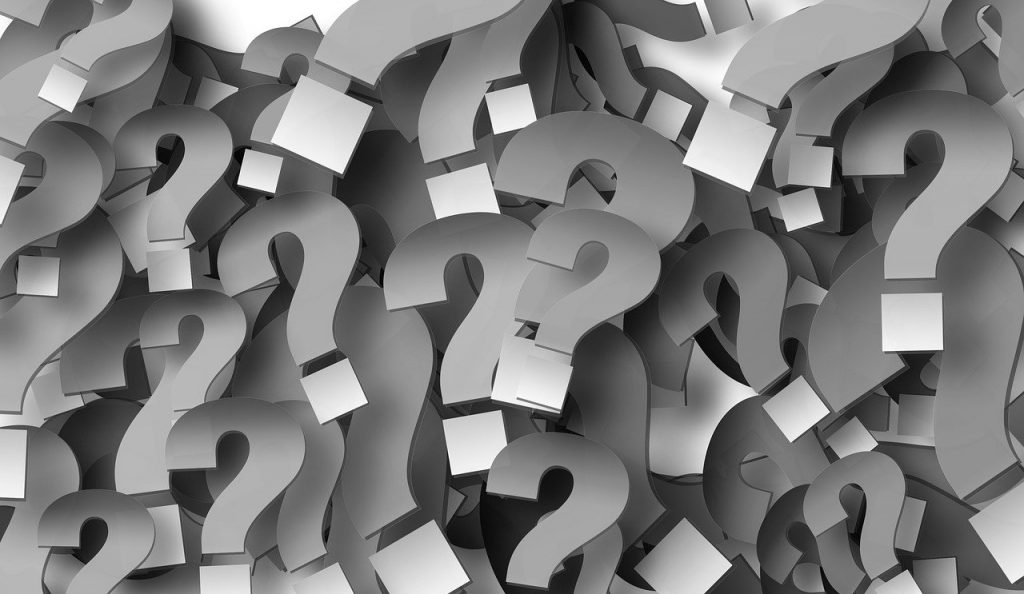 The word “advent” means “arrival.” It is a season for waiting. Throughout the four weeks we are waiting in different ways for Jesus, whose first arrival is celebrated at Christmas. While we wait, we have questions. So does our text.

On Advent 1 the lectionary Gospel had us in the present, waiting for Christ’s 2nd coming. On Advent 2 we were standing in the Jordan with John the Baptist, waiting for the beginning of Jesus’ public ministry. Those weeks the nature of the waiting was kind of obvious.

Now on Advent 3 we find ourselves in the midst of Jesus’ ministry.

Well, what are we waiting for?

All through Matthew 11:2-11 there are questions in the air. We wait for answers. What we want and don’t have on the third Sunday of Advent is clarity.

Our story begins with John the Baptist in prison. He didn’t know what his end would be but he knew he wasn’t the Messiah. He had evidence that Jesus was the Messiah. In Luke when both Jesus and John were in their mothers’ wombs, John leapt in recognition of his Lord (Luke 1:39-45).

And here in Matthew, John almost refused to baptize Jesus asserting Jesus’ superiority. Then when he did baptize Jesus, the Spirit descended and the Father claimed Jesus as his Son (Matthew 3:10-17).

But by Matthew 11, John’s life is looking pretty grim.

He’d been at the center of the action, told from his birth that he was a key figure in God’s Big Plan of Salvation. Now he’s been in a moldy cell since chapter 4. He’s gone from famous preacher to forgotten prisoner.

I suspect John was in a bad place emotionally. When people get ground down by circumstances, even the things that once were clear seem kind of muddled.

Maybe he’d just been fooling himself.

Maybe this wasn’t the moment for the Messiah.

How could he know? He couldn’t even see the action for himself. He had to wait for visitors to bring him the news.

He kept hearing stories about his cousin. Jesus was supposedly doing amazing things. Maybe he was the one promised in the prophets after all.

So John sent some of his own disciples to find out:

Just tell us clearly, John asks. Jesus, really, are you the Messiah?

John wouldn’t be the last to ask about this. The question followed Jesus all the way to the cross. And some of us keep asking it today in our heart of hearts: Are you really the one I’ve been told you are? Should I go about my business or turn and follow you?

Jesus was just as inscrutable with John — and just as clear — as he would be with Pilate:

Jesus’ actions will have to serve as his answer.

That is, Jesus’ actions as mediated by faithful witnesses. John’s disciples were told to bear witness to a particular set of Jesus’ actions:

the blind receive their sight,
the lame walk,
the lepers are cleansed,
the deaf hear,
the dead are raised,
and the poor have good news brought to them.” (Matthew 11:5 NRSV)

What is interesting about this response is that Jesus doesn’t point out that these actions fulfilled the role of the promised Messiah.

Over in Luke, at the beginning of his public ministry, Jesus preached on the relevant passage of Isaiah:

The Spirit of the Lord is upon me,
because he has anointed me
to bring good news to the poor.
He has sent me to proclaim release to the captives
and recovery of sight to the blind,
to let the oppressed go free,
to proclaim the year of the Lord’s favor.” (Luke 4:18-19 NRSV, cf. Isaiah 61:1-2a)

Luke summarized Jesus’ sermon on the text as

Today this scripture has been fulfilled in your hearing.” (Luke 4:21 NRSV)

One of Matthew’s favorite things to do is to point out where Jesus’ life and teaching fulfills what had been promised of the Messiah in the biblical Prophets. So why does Matthew put Jesus’ list of his accomplishments out there without referring us to Isaiah 61?

I suspect that it was because Jesus himself wanted the report of his actions to be enough for John. The Baptist was supposed to make the inference and come to clear faith.

Likewise Jesus wants the report of his actions to be enough for us. We too are supposed to make the inference and come to clear faith.

(And we, like John the Baptist’s disciples, are supposed to give testimony to what we see and hear of Jesus’ actions in the world.)

So John’s disciples went back to tell what they’d seen and heard, and Jesus was left with the crowd. He seems to have intuited that they were asking a question themselves:

Who is John the Baptist, really? Does he have a big place in God’s salvation story?

Jesus gets up a good head of steam and answers that one directly:

This is the one about whom it is written,
‘See, I am sending my messenger ahead of you,
who will prepare your way before you.’
Truly I tell you,
among those born of women
no one has arisen greater than John the Baptist;
yet the least in the kingdom of heaven
is greater than he.” (Matthew 11:10-11 NRSV)

So John is the messenger promised in Malachi 3:1, and the greatest person ever born. Clear enough.

But John is also less than the least in the kingdom of heaven. Back to enigmas.

Jesus’ ramp-up to answering the crowd’s unstated question was a barrage of questions of his own:

These six questions that Jesus asked the crowd are, I think, very much the point for us on the third Sunday of Advent.

Last Sunday we went out to the Jordan to see John the Baptist. He called us to repent and be baptized and we came forward to commit. This week, Jesus asks us whether we meant it.

What did we go out to see?

Just a reed shaken by the wind? Was our commitment to turn from the wrong way and pursue the life God intended just a matter of entertainment? Just watching the grasses blow in the wind on the banks of the Jordan?

Someone dressed in soft robes? Were we secretly hoping that by accepting John’s call to change our minds and our lives we would find ourselves happier and richer? As if John, in his camel’s hair coat were really dressed for style and comfort?

A prophet? If we were on the right track we were maybe hoping John was a prophet, someone speaking the very words of God to us and our time. Jesus says yes — that and more.

Hear and heed the prophet’s words. Change your mind, your way of thinking about life, and the world, and yourself, and God. Let the change go deep until it changes who you are and how you live in the world.

Because the prophet John wasn’t just speaking the words of God for a moment. He was preparing the way of the Word incarnate.

The Word is coming. We have to be ready.

I’d love to send you my Monday Meditations as well as my other new articles and announcements. Scroll down to the black box with the orange button to subscribe, and they’ll arrive by email most Fridays.