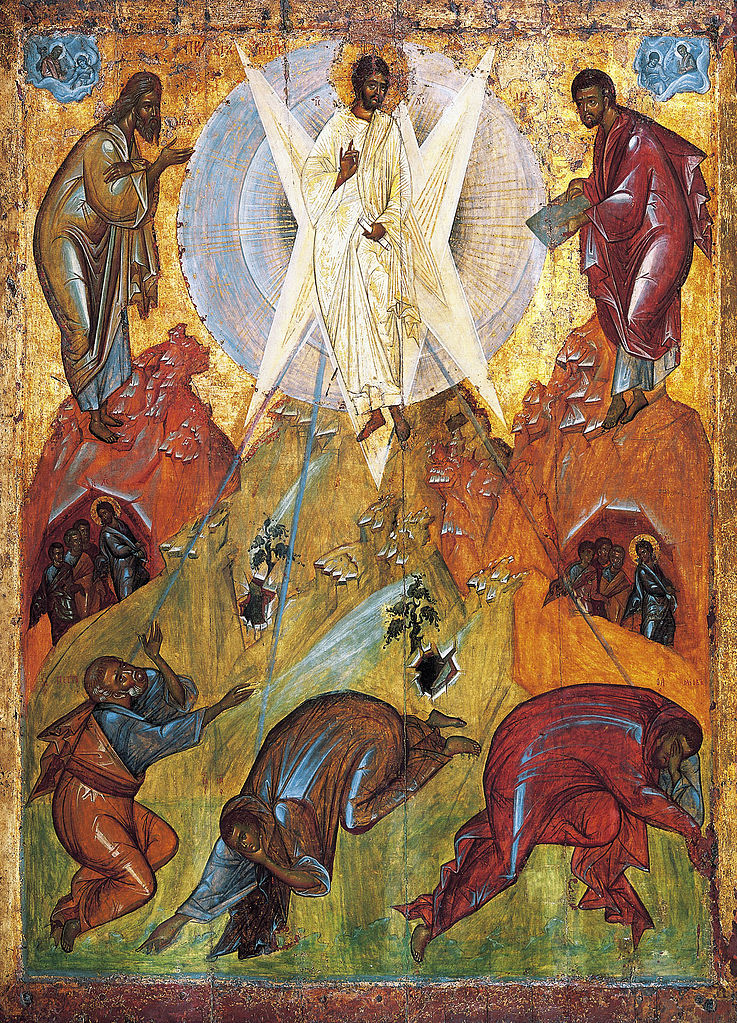 In the Revised Common Lectionary, on the last Sunday before Lent, the Gospel reading is always the Transfiguration. This year, year “A,” we get Matthew’s version.

There are small differences between the accounts.

Still, even stripped down to the facts, Matthew 17:1-9 tells a fascinating and rich story. The scene takes place

after Jesusand began predicting his passion and resurrection. That’s the same as in Mark, while Luke places it

about eight days after these sayings” (Luke 9:28 NRSV)

All agree, though, that it was after he began to tell them what was coming. The fact that three of them were given this peek into the mysteries seems to be of a piece with this: they were trusted insiders now that Peter had identified him clearly as the Messiah.

And it is these three, Peter, James, and John, who will continue to be the insiders among the insiders.

Poor Andrew. Peter’s brother Andrew was there from the beginning — called with Peter before James and John in this Gospel; in John Andrew was actually called first, and went to get Peter. But now, Andrew is left out.

Thankfully, Andrew was not one to complain.

So up they go with Jesus, high up on the mountain.

I find it notable the way Matthew (and the other evangelists) portray what happens. It is tempting to say their eyes were changed, or their eyes were opened somehow, to see Jesus in such glory. Matthew says the change was not in the disciples but in Jesus.

And he was transfigured before them,
and his face shone like the sun,
and his clothes became dazzling white.” (Matthew 9:2 NRSV)

Jesus does call it “a vision” in verse 9, but clearly in verse 2 what they saw is reality. Jesus, who to ordinary eyes usually looked like an ordinary human, somehow showed something different — something of his deity.

He is true God and true human, as Orthodox Christology puts it. Both were true always, from his very beginning. It’s just that most of the time the naked eye could not see the true divinity directly. We had to look at what Jesus did, and what Jesus said, and make the inference.

Here at the transfiguration, Jesus let their eyes see something that had always been true but which was usually hidden.

Then something else is revealed to their eyes: Moses and Elijah are there — the one to whom the Law was given and the representative of the prophets, both of whom fasted 40 days like Jesus, and both of whom were led through parted waters.

And of course Peter, thinking they were going to all stick around, makes his goofy suggestion of building houses for them up there.

But what I find most striking is the little detail of what happens while Peter is talking:

While he was still speaking,
suddenly a bright cloud overshadowed them…” (Matthew 17:5 NRSV)

Only Matthew mentions that the cloud was “bright.”

So imagine it: you are up on a mountain. The fog rolls in. You are effectively blinded, unable to see what is in front of your face.

It’s an image we associate with darkness.

Matthew says it was bright.

It’s the kind of paradoxical language about God’s presence that writers on prayer have always loved.

That’s because this cloud, this misty thing that kept the Apostles from seeing with their physical eyes, was actually the presence of God.

We’re a bit more comfortable, I think, with the Transfiguration itself, where our eyes see Jesus and really see he is God.

But most of the time, the cloud is a lot more like our reality. God is present. We hear it from Scripture and we trust it by faith. But we can’t see God’s presence with our eyes.

But before I go too far reveling in the mystery of the bright cloud, Matthew gives us something our senses can grasp.

This too is something that writers on prayer have emphasized over the centuries. God speaks. God’s Word is what we should focus on.

The great 20th century Catholic theologian, Hans Urs von Balthasar, pointed out in his book Prayer, that whatever we say to God in the conversation of prayer, we are always only responding to God who has spoken first. Look at Scripture; God is speaking there still.

Here at the Transfiguration, when we are stuck in the cloud of mystery and befuddlement, the voice of the Father speaks. And what does the Father say? Pay attention to the Son.

Over in John 1, remember, the Son is emphatically named God’s “Word.” When God speaks to us, the message spoken is Jesus.

And the disciples were completely blown away by this. According to Matthew,

When the disciples heard this,
they fell to the ground
and were overcome by fear.” (Matthew 17:6 NRSV)

They had been following Jesus for a long while. They had, just one week ago, proclaimed their faith in him. As Peter put it,

So you’d think this message would be nothing new when the Father spoke from the cloud. Instead Peter was thrown onto his knees.

I guess you might say Peter had confessed what he merely thought in his head. Then at the Transfiguration, he found himself facing that truth in its blinding reality.

Strangely, Jesus tells these three witnesses of the Transfiguration that they mustn’t talk about it to anyone, not even the other nine Apostles, until after his resurrection.

Meanwhile, even if they couldn’t talk about it, they could learn to live in light of it.

And we too need to do what that Voice said to Peter, John, and James. Even in our cloudy and confusing 21st century reality, we need to look at Jesus, see that this is God the Son in human flesh, and genuinely listen to him. We too need to live in light of who he really is.

My online prayer class for Lent is open for new registrations — but only through Ash Wednesday. It’s called Focus on Prayer, and we’ll dive in to learn and practice classic approaches to prayer that help our prayer lives gain the focus we need. Get full info through this link.