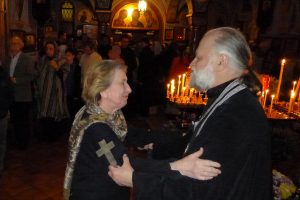 A couple weeks ago I attended a gathering for the night before Lent began. No, this was not a Shrove Tuesday pancake supper. Nor was it a Mardi Gras carnival. This was a Sunday evening worship service.

It was an Orthodox church — and for the East Lent does not begin on a Wednesday. Orthodox Lent begins on a Monday.

They call the day before Lent “Forgiveness Sunday.” The service that marks that transitional moment is called “Forgiveness Vespers.” I had heard about it for years, but I had never been able to attend.

Mostly it was a matter of scheduling, but as a Protestant I wasn’t sure if I was actually welcome. And if I showed up anyway, I didn’t know if I could participate fully. The Orthodox practice sacramental confession, and if the “forgiveness” of forgiveness Vespers was tied to confession I would be the odd man out.

This year my schedule was free. Plus the priest had told me I could participate fully. Good to go.

For the most part this was a regular Vespers service. I’ve been to many of these, so the cycle of prayers and hymns, with the smell of incense and surrounded by icons of Christ and the saints was familiar territory — beautiful, awe-inspiring, and comforting.

It wasn’t totally ordinary, though. The Orthodox spend several weeks ramping up for Lent, getting their penitential muscles in shape.

(And I do mean muscles. In this service a particular prayer that is common in the Lenten services made its first appearance. It’s called the Prayer of St. Ephrem the Syrian, and while they say it the faithful move out to the aisles and make several prostration’s. It can make worship almost aerobic.)

The Ritual of Forgiveness

The thing I actually came for, the “rite of forgiveness,” or “ceremony of mutual forgiveness,” started after the Vespers service proper. Here’s how it played out.

Then she stepped her left and stood beside the priest, turning to face the same direction as him.

Then that second person in line moved one step to the left to stand in front of the one who had been first in line.

Then this second person step to his left, turned around to stand at the end of the line that started with the priest.

This continued, for every person in the line — maybe 100 people. Only a small handful of those in attendance opted not to participate.

Then from my new place at the end of the line I asked and gave forgiveness to the remaining 50 who came after.

And each exchange of forgiveness came either the kiss of peace open (the good old European way, with a kiss on each cheek — or in the air nearby), or with a gentle bow, or occasionally with full prostration.

The words were not always precisely the same, anymore than the actions that followed. As the priest graciously emphasized,

There is no wrong way to do it.”

I am sure there are Orthodox out there on the inter-webs who would say that there really is just one Right Way and many wrong ways to do this.

There might well be some, both Orthodox and Protestant, who would say that I, a Presbyterian, should not have participated.

But I think there is gospel in this parish priest’s flexibility, and the community’s openness to those were not communicants members.

I am really, really glad that I participated. As Peter said to Jesus at the Transfiguration,

Perhaps you roll your eyes at the phrase “ritual of forgiveness.” Maybe you think that if it’s reduced to a ritual, it’s not really forgiveness.

But here’s the thing: what you do in ritual trains your heart, your mind, and your body for living the reality.

Asking 100 people to forgive me, one at a time, is excellent practice.

Granting forgiveness to 100 people, one at a time, is also excellent practice.

In my Protestant world I have observed that there are many in the church who are not very good at the reality of forgiveness.

So this “ritual” of forgiveness is an opportunity to practice one of the most essential Christian life skills. How I wish that all the Protestants in the world would take it on as an annual practice.

Perhaps then we might begin — perhaps we might learn how — to live out forgiveness as a daily expression of our faith.

It certainly is a marvelous way to enter into the season of Lent. I love starting this holy season of repentance and renewal knowing that, at least for a moment, all is well between me and the other members of the community.