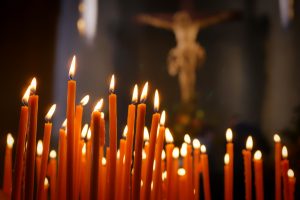 Last week I started writing about how to have a really excellent first visit to an Orthodox church. I think you need to be aware of several differences — just six or so — between the Christian East and the Christian West.

The first one is outside, when you look up and see a dome instead of a steeple.

Once you’ve found the front door and stepped inside, the next big difference between East and West smacks you upside the head.

The space inside the door of an Orthodox church is called the “narthex.” That’s what it’s called in traditional Western churches too. And you’ll find other similarities — though you will probably be more struck by the differences.

If your experience is anything like mine you expect a few basic things when passing through a church narthex.

But that’s it. The narthex of a Western church is basically a passageway.

You will find all or most of those things in the narthex of the Orthodox church too.

However, on your first visit you might not notice any of them. There will be too much going on. And the differences between your own background and Orthodoxy will be too prominent.

When you step inside, look around. You will see paintings (“icons” is their official name) of Jesus, and of his mother Mary, and probably of other saints.

There are probably candles burning in front of the icons, and either racks or sandboxes to hold more candles.

And you will notice that the members actually stop in the narthex for a bit.

And they do stuff while they are there.

They may do all of this repeatedly.

At about this point the died-in-the-wool Protestant begins to, in technical terms, freak out.

One of the impulses of early Protestantism was a biblical objection to what they saw as the idolatry of medieval Catholic popular piety.

All the action in the narthex sets off those inner alarms.

A bit lost in this space, we hear

I’m convinced that the truer inner message, as we are surrounded by a surprisingly colorful foreign world, is more like

Toto — I have a feeling we aren’t in Kansas anymore.

More about icons in the next installment in this series. For the moment you’ll just have to trust me:

No Orthodox Christian in that narthex is worshiping an idol. Ever. Really.

What they are doing is praying to God. That’s what the Narthex is for.

The Orthodox are encouraged to prepare for worship in a variety of ways even before they arrive at the building. When they step into the narthex, the preparations become even more focused.

There is a good chance that they start by silently praying,

I will enter Your house and worship toward Your holy temple in the fear of You. Lead me, O Lord, in Your righteousness because of my enemies; make my way straight before You, that with a pure heart I may glorify You forever: one divine power worshipped in three Persons: Father, Son and Holy Spirit, now and ever and unto ages of ages. Amen.

(I’ve found this prayer, with variations probably due to translation, on Greek Orthodox, Antiochian Orthodox, and Orthodox Church of America websites.)

They may pray other particular prayers before the icons of Jesus and of Mary. Or they may be bringing their own needs to God in their own words. But the narthex is more than a passageway with a coat rack. It is a place of prayer.

Their prayer looks different from yours on the outside. The chances are good that in the heart it is very similar.

But now, while everyone around you is praying and getting ready to enter the worship life of heaven itself under that dome, let me give you a couple of invitations (and a handy pro-tip) that, I hope, will allow you to relax.

I’m taking this on myself, by the way, but I think that your local Orthodox church is very likely to agree.

Lighting a candle is not an “insiders” thing that visitors can’t do. It’s just a part of praying.

So, if it helps you focus on bringing your prayers to God, then you can put an offering in the box, take a candle, and light it from one of those that is already in the stand. Then place it in the stand or sandbox.

When in Byzantium, do as the Byzantines do.

But if you don’t want to light a candle, then that’s fine too. Nobody is making a list of who does and doesn’t. (Or if someone is making a list, they should probably mention it next time they go to confession.)

This again is not something reserved for insiders. Nor is it something that everyone does precisely in unison. It is a way of showing your reverence for the cross of Christ which brought us salvation, and of honoring God, the Holy Trinity.

There doesn’t seem to be a wrong time to give glory to God.

If you choose to make the sign of the cross, it will seem perfectly ordinary to all the Orthodox around you.

If you don’t, I doubt anyone will be bothered.

Pro-tip:  If you decide to make the sign of the cross, here’s how to do it.

First, unlike in Catholic practice, you hold your hand in a particular way:

Then it goes in a different pattern than Catholics:

My own way to remember this is “up, down, close, across.”

Last of all, you are warmly invited to be reverently baffled by what is coming.

They will probably hand you a bulletin of some kind, but it will not help you follow the Liturgy at all.

They may hand you a book or pamphlet with the text of the whole Liturgy, but it is very unlikely that even this will help you follow along.

There are many local and seasonal variations to the largely unchanging Liturgy. So much so that I’ve never seen a printed version that exactly matched what happened on any particular day.

So don’t expect to follow it word by word. Expect instead to experience it.

Let yourself be open to the unfolding drama.

The parts of you that usually respond to a worship service may not get much attention. But you might find yourself moved in surprising ways by what Scripture calls “the beauty of holiness.”

Ready to step inside?

I’d love to send all the installments of this series right to your inbox — along with links to other new articles and announcements. Just scroll down to the black box with the orange button to sign up for my weekly(ish) newsletter.