There really is a common thread holding together all the posts on my blog.

(Well, almost all of them.)

Let’s see if you can find it. What do the following have in common:

Answer? All of these are to my attempts to mine the best of the Christian past. In everything I write about I’m trying to look for wisdom from the past to follow Christ better today.

Another way I like to talk about it is this: I’m giving you back your treasures — things Christians today have lost but never even know they owned.

By not knowing our history, we’ve lost some of the best things we ever had. And we don’t even know they’re gone. 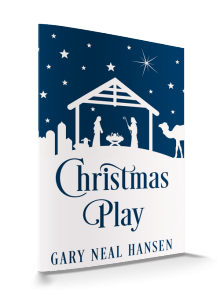 For about the past six months I’ve been working on a side project that I haven’t talked about on this blog very much. It’s a play, a Christmas play for production in churches.

I gave it a clever title. I call it “Christmas Play.”

It will soon be available on Amazon and elsewhere online — probably a little late for most churches to think about producing in 2015, but who knows?

In my Christmas Play the text of the Bible, the story of the coming of Jesus Christ, becomes the script.

But,” you say, “Christmas isn’t lost. Those nativity stories are right there in the Bible. Thousands of churches act them out in plays and pageants every December.”

Well, I beg to differ. I think these treasures have been pretty well hidden.

Yes, the story of the coming of Jesus is in the Bible. But a lot of Christians have lost the habit of even opening up Scriptures. There is a lot in the nativity stories that people just don’t know anymore. You’ll see.

Yes, churches have pageants, with shepherds in bathrobes. They are adorable. But our pageants rarely enact the whole biblical story of Christ’s coming.

We never have the kids explain, as John did that this Jesus who is born is actually the eternal Word, who was with God in the beginning. We don’t act out the idea that he is God.

And we never, never include the tragedy of Herod’s slaughter of the innocents — but all of this, and more, is part of the drama that Scripture portrays.

Yes, there are dozens of Christmas plays out there. But so many try so hard to be so modern that Jesus’ birth becomes a sort of afterthought. The play becomes a set-up to complain about misbehaving kids, or greedy Christmas lists, or materialism, or holiday distraction and busyness.

Then they shoehorn in the bathrobe nativity almost as a sidelight.

So I wrote this Christmas play. The kind folks at Crossway gave me permission to use the ESV text with its classic accessible language.

It’s all straight from the Bible — every passage on Jesus’ coming from Matthew, Luke and John.

Oh yes: the shepherds are there. The Angels too, and the Magi.

The kids can wear their bathrobes. Grownups too. (It’s intergenerational.)

But they get to tell the whole story.

You can pick up a free copy right here on this site. Check it out. Let me know what you think.