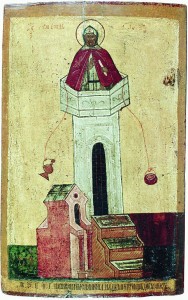 I’ve always known in my bones that we should celebrate New Year’s Day on September 1.

New pencils. Empty notebooks. Fresh eager faces. New classes to take or to teach. That is when it all starts for me.

I’m now very happy to discover that the Orthodox Church had the same idea centuries ago. September 1 is the beginning of the Eastern Church’s year too.

Of course they gave it a fancy name: “The Beginning of the Induction” is one of those Orthodox words for which one needs a secret decoder ring.

By a happy turn of Providence, on the same day the Orthodox also celebrate the life of St. Simeon Stylites (c. 388 – 459).

He was born in the 4th century, when becoming a monk was as hip as carrying a new iPhone. (I’m not kidding. Fasting and poverty in the desert or a monastery was huge.)

Simeon was extremely keen on this. His fasting and other ascetic practices were so strict that his monastery politely suggested he leave.

He got creative about it. First he moved into an old dry well. Then for a while he lived in a cave. But it seems that withdrawing from the world wasn’t exactly what Simeon wanted.

He thought up a completely new way to be a monk: he built a sort of pillar six or eight feet tall, with a little hut on top of it, and he moved in.

Over time he built it up taller and taller. Eventually it was somewhere between fifty and eighty feet tall.

He lived up there for thirty-seven years.

Thirty-seven years on top of a pillar.

I kid you not.

I’ve taught about him for long enough to have a pretty good sense of what you are thinking.

What kind of whackdoodle Christianity is it to live on top of a pillar for well over three decades?

You are probably thinking

How could that possibly express the love of God? Shouldn’t he have been loving his neighbor?

What was he doing up there all that time?

Thirty-seven years of devotion to Jesus

Fasting and praying may not surprise you—though you would be surprised if I told you how much of either that he did.

What might be surprising is that he spent his time serving and loving people.

How, you might ask, could he serve anybody on top of that pillar?

Well, he made himself a bit of a public attraction. People were curious. They came by. They asked questions.

Every afternoon he came out to talk with people. Huge numbers of people. Every single day.

He counseled and advised.

He helped people settle their disputes and heal broken relationships.

Pagans were so impressed with his life that they were converted to Christianity.

This guy on the pillar was no joke. Emperors listened to his advice.

I’d say that all his time invested in prayer was a life well invested. God answered. God used Simeon.

In our culture Christians want to blend in. We say we don’t want to offend people with our faith, but sometimes we just are afraid of looking different.

Here’s the thing: St. Simeion Stylites would do anything for Jesus.

If  a life devoted to prayer and serving others means looking different, then just be different.

Meanwhile I think I won’t criticize St. Simeon Stylites until heads of state want my counsel. Or until my witness to Christ converts some pagans. Or both. For several decades.

I’d love to hear from you in the comments! What’s the wildest thing you’ve done, or seen, to bear witness to Christ?